Talk to the NPC Spiegelmann in either Kerning City, Orbis, or Ludibrium to enter Monster Carnival. 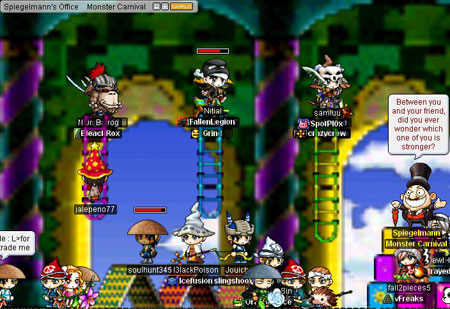 Monster Carnival is unlike other PQs, in that this is a competitive party quest pitting your party against another party. Your goal is to collect the most amount of Carnival Points (CP) by killing monsters from the opposing party, and these CP, in turn, can be used to perform 3 tasks to distract the opposing party: Summon a Monster, Skill, and Protector. There are also designated hotkeys that can be used when selecting one of these three tabs to activate it.

Summon a Monster:
Monsters can be summoned to attack the opposing party.

*Rombots cost 22CP to summon in Carnival Fields 1 and 2, and 30CP in other Fields. There are currently unidentified conditions that determine which of the both CPs will occur.

Skill:
Skills can be used against the opposing party, and if used wisely, can turn the tide of the battle.

Protectors:
Protectors are buffs that can be casted on your summoned monsters. It it recommended that they are only used after you have summoned many monsters. When casting Protectors, they will appear as a pillar with a gem on top. Attacking and destroying these pillars (including your opponents' pillars, denoted by the colour of the gem) will remove the buffs. 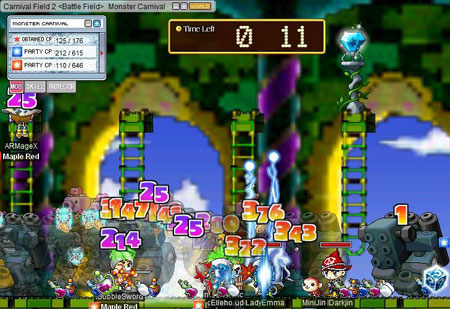 Items that are dropped in this PQ will be used up instantly (except for Maple Coins, for redeeming prizes later). In addition to the usual potions (Mana Elixirs, Elixirs, etc), the following is the list of other items dropped:

As there is not one perfect strategy - as conditions such as what jobs the opposing party members are, and what Carnival Field you're in, will require a different strategy each time - there will not be one written here. Simply play through a game or two to familiarise yourself and work closely with your teammates to win. Also do note that each round takes 10 minutes. 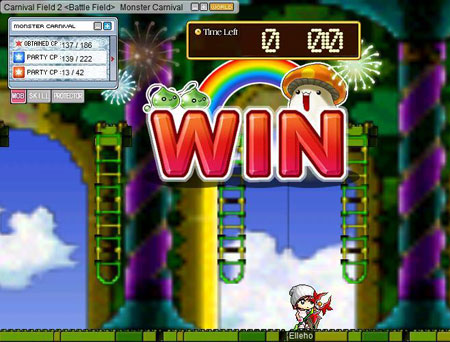