You need to be Level 60 and above to do this party quest. This PQ must be done with a party of 4 members or even alone; there are also no restrictions on the level difference between party members.

Different Modes:
There are four modes in this PQ: Easy, Normal, Hard and Hell. There are different level restrictions for each mode as follows:

Harder modes contain higher levelled monsters, while the rewards in the Bonus Round are different. Otherwise, the gameplay is identical in all difficulties.

This PQ consists of 5 stages and a Bonus Round. The 1st Stage lasts for 2 minutes, Stages 2-4 last for 3 minutes each, while the Bonus Stage lasts 1 minute. The aim of each stage is the same: to hit/kill as many monsters as possible.

There is an ACT bar for every stage – the ACT bar fills up when you kill monsters, and running out of ACT before the stage's time is over will cause you to lose the PQ automatically and obtain a Rank D.

All the mobs in this PQ have only 1 HP, so the damage dealt is irrelevant. In each stage, there is 1 more portal available for the mobs to spawn from, thus increasing the total monsters available for killing in the stage. Starting from Stage 2, Yeti Pharaohs will spawn. The Yeti Pharaoh has high avoidability and can only be killed by using the Rage of Pharaoh skill. Hitting the Yeti Pharaoh will cause misses which would lower your ACT. The idea is to kill the mobs while avoiding the Yeti Pharaoh, which can be easily spotted by the exclamation mark at the top of their heads.

Every hit done will have a certain chance of turning into a “Cool” hit, which will give a higher EXP reward at the end of the PQ.

Special Buffs:
The buffs are automatically given to players once a certain number of kills is reached and will be removed once the PQ ends. The buffs give the special effect of a flame surrounding the player. 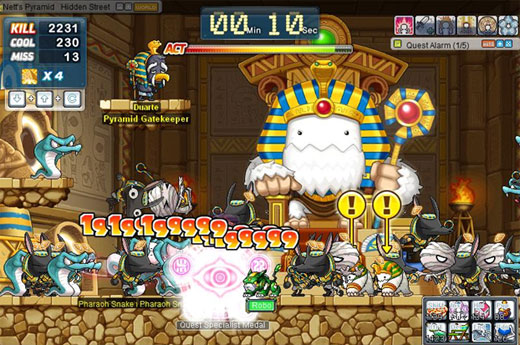 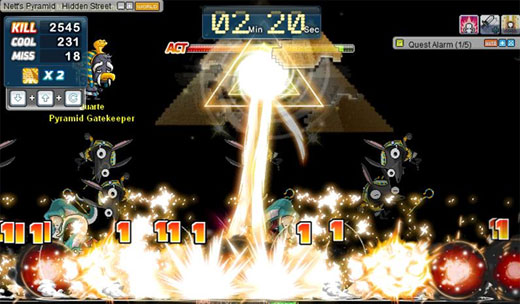 Using the Rage of Pharaoh skill.

In Party mode, the kill counts are recorded separately for each player, and the ACT bar falls faster than in solo mode. Nonetheless, players will get extra EXP for every member of the party at the end of the PQ.